Lily the Tiller is a nomadic gardener on the permanent lam from a bleak, abusive past. Scouring the lanes of South West England looking for temporary work, she pitches up at Motthoe, a now dilapidated, but once grand, country estate, where Dreamer Harry – Motthoe’s reluctant owner via recent inheritance – falls for her with only the slimmest hopes of reciprocation.  In Lily’s care, a walled garden at Motthoe begins to blossom and the greening magic of this new life touches each of Motthoe’s cast of idiosyncratic inhabitants.
But, even in the midst of this community blossoming, dark hints and ill-omens suggest Lily’s grim history can be run from no longer. 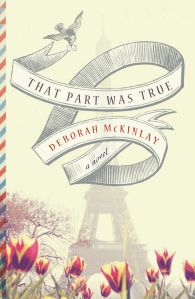 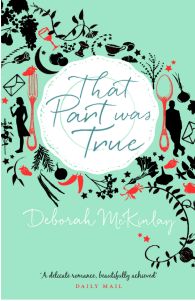 That Part Was True

How rewarding to perch on the shoulder of a character Barbara Pym might have conjured — a late bloomer who possesses “brickish stoicism” and brews tea on an Aga.

Fans of good old-fashioned letter writing and smooth, solid prose will be happy to snuggle up with this second fiction offering from British author Deborah McKinlay.

This little gem of a book offers a story filled with emotional depth and richness.

How often do you write letters? I mean, actually sit down with pen and paper and write to someone, in full sentences? Even before stamping and mailing the damn thing it seems like more effort than it’s worth.

This was such a refreshing romantic read, especially because the main characters are middle-aged with tempestuous pasts. 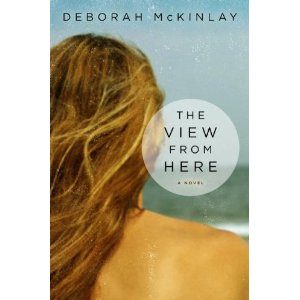 The View From Here

Also available from lots of other booksellers including these fine stores – Skylight Books, Strand Books and Foyles.

In British writer McKinlay’s fiction debut, a carefully modulated morality play, a middle-aged woman who knows she is dying struggles with a basic dilemma–“whether a good deed cancels a bad one, whether evil is undone by penance.”

Married for over 20 years, Frances and Phillip live in rural England, where Frances has devoted herself to raising Phillip’s now-25-year-old daughter Chloe, whose birth mother abandoned her, as her own. At 45, Frances is diagnosed with a fatal tumor, and Phillip drops his life in London to stay at home and care for her. But Frances has recently discovered a letter that links him romantically with a younger woman named Josee, the London-based editor of his books on marketing. Without confronting Phillip, Frances follows him into the city and witnesses what is obviously a farewell meeting. Over the next months, as she watches Phillip’s behavior, she reflects back on her own behavior as a footloose 22-year-old in Mexico and feels compelled to record in writing her involvement with a group of wealthy Americans whose selfish hedonism bring to mind The Great Gatsby: The three couples—Patsy and Richard, Bee Bee and Ned, Sally and Mason—seem interchangeable when they first meet Frances at a bar and invite her to come stay with them at the lavish estate where they are spending the summer. But soon Frankie, as they call her, begins a passionate affair with Mason. She considers Sally the villain and chooses to ignore that Mason and Patsy are also lovers, until it is too late. Guilt over her own culpability in the affair, and in its aftermath, pervades Frances’ last days, during which she recognizes Phillip’s loyalty and love along with his betrayal. As the novel glides fluently between Frances’ reactions as an obsessively thoughtful dying married woman and Frankie’s as a callow girl whose selfish desire for Mason trumped all other reactions, an uneasy sense of ethical murkiness grows.

A riveting novel in which the deceptively clear narrative voice offers no easy answers.

The certainty of death is part of what drives Frances to reflect and record the part she
played in another family’s tragedy a lifetime ago in Mexico, where she was known as Frankie.
Back then she was the beach-house guest of a wealthy family, the patriarch of which took a
liking to her, a liking Frankie mistook for love. She learned the hard way that she was simply a
part of his habit, and the morbid consequences of her emotional reaction haunt her older self as
she nears the end of her life.

Frances makes for a good narrator; she is honest, devoted, and able to weigh the future
of her loved ones against her own sense of rage at her husband’s infidelity. As a young woman
she is infinitely recognizable. Most readers are familiar with that particular brand of innocence,
the kind that maintains a willful blindness to both the devastating effects of one’s actions and to
the disappointing possibility that one may make no mark at all amongst people more powerful.

Deborah McKinlay, English author of several nonfiction books, keeps the past and
present acutely balanced with a deft, precise narrative that makes readers both eager to know the
end and unwilling to speed through such succulent prose. Her use of character is brilliant. The
wealthy family and their fashionable friends manage to retain their defining details—BeeBee’s
wry, dry wit and Richard’s stiff attempts at joviality—while blending into one another in a
sweeping portrayal of privilege. Readers will like both the youthful and more mature Frances,
and will likely admire her strength, endurance, and dignity. One might find oneself wishing for a
miracle cure even while one laps up McKinlay’s descriptions of the end of a marriage and the
end of a life. When Frances reveals her crime, it’s impossible to react with a sense of extreme
judgment.

A book of sweet, studied passion, The View From Here is both an escape into an oceanside
tale of splendid fun and a deep dive into the moral questions that can define lives and
deaths.

“I was a blonde eating an avocado, in a country where avocados were plentiful and blondes were rare.” So begins this sleek melodrama, the writer’s fiction debut. The narrator, a middle-aged British woman named Frances, has just made two shattering discoveries. One is that she is mortally ill. The other is that her husband is in love with another woman.

For reasons that turn out to be more complicated than we suppose, her thoughts return to that long-ago summer when she was an unencumbered young thing living on a shoestring in Mexico. As past becomes present, Sally and Mason Severance, a rancidly sophisticated couple vacationing with friends and assorted children in a beachside villa, take a manipulative fancy to the girl and invite her to move in.

Like Nick Carraway, Frances at 22 is irresistibly drawn to the languid glamour of the Severances and their set even after the odor of rot has become overpowering. The novel is not otherwise “Gatsby”-esque. Though the Severances and company are supposedly American, the British author has little grasp of the idiom and insufficient means for distinguishing one cast member from another. Only Frances makes any claim on our sympathy, and in a massive concluding gamble, the novel whisks even that away from us.

The true measure of a good storyteller is how long they can continue to keep the reader engaged. As I turned the pages of McKinlay’s devastatingly bleak melodrama, so compelling was the narrative that I almost finished it in one sitting. In what is simply one the most beautifully realized novels of the year, the author proves once and for all that we must be held to account for our sins.

At forty-six, Frances is terminally ill, although it is not the illness that is uppermost in her mind. She has recently discovered a letter from her husband’s mistress. The letter, telling of clandestine meetings and promises of true love, becomes a catalyst for Francis’s discomfort, reminding her of stories past when she worked as an English teacher in Mexico in 1976 and fell into the company of a group of attractive, wealthy, carefree Americans.

Enticed by the “practiced charm” of Sally and Mason Severance and their guests, Richard Patsy Luke and Ned and Bee Bee Newson, Francis finds her life taking on “a new kind of glamour.” Caught up in the joyful undercurrent of anarchy, charm, beauty and heady entertainment, Francis is seduced under the hot Mexican summer beating down on a lush oasis of drinking and laughing where poolside swimming is as essential as lazy afternoons spent chatting below the yellow sun umbrellas and purple bougainvillea.

Francis is immediately enthralled by the Severance’s house, a “butter-colored palace” with high-walled, glamour-tinged privacy above a crystal sand beach. The men, “sun-burnt and bedraggled in their open-necked shirts,” are presided over by Sally with a majestic mix of grace and authority. There are the squealing, teased children – Paige, Leslie, Jenny, and little Howie – always in constant revolt and friendly rebellion.

Moving between a rose-tinted past and an uncertain future, Francis writes these vivid recollections with a sense of urgency, willingly exposing herself to the tragic outcome of that summer when, adrift on affection and sunshine, she embarks upon a clandestine affair. Only the bold sexual exertions of Mason can light up “a shivery state of desire” and fulfill her wildest fantasies.

Many years later in a rearranged world, Francis must decide whether to confront her husband, Phillip, and the truth behind his weekly trips to London. With her passion, blood and youth slowly draining, she must finally confront the ugly realities of her philandering husband and the ramifications of her past transgressions, so long buried deep within her soul.

Eventually dreams turn real and reality becomes distant. A thin crevice of ill will finally takes root in Francis’s psyche in hideous vibrancy. McKinlay’s fluid psychological novel takes flight, showcasing one woman’s descent into a maelstrom of infidelity and a past that challenges forever her view of her marriage and of the world around her.