What inspired you to write Lily the Tiller, and how did you create your character, Lily?

For me, writing inspiration is rarely an “Aha.” Usually, a whole bunch of nuggety ideas rub around in my brain for an age before they fuse.

An Interview with We Love This Book – How I got published

Despite the tsunami of information aimed at debut authors, there are plenty of mid-career writers who find themselves agentless, publisher-free and scrabbling for grocery money. I did.

Deborah’s favourite recipe revealed at By Book or By Cook

Deborah McKinlay’s new novel That Part Was True is the story of two people who have never met, but fall for each other through letters and a mutual love of food. Here, Deborah tells us about the recipe that means the most to her.

An Interview with Kirkus – Getting to the Truth

“Never combine low blood sugar with a high horse,” says @YourAuntLola, Deborah McKinlay’s Twitter alter ego. But the actual Deborah McKinlay, a New Zealand-born, British-based author, thinks she does that sometimes. “When I’m feeling a bit low and grumpy, I allow myself a level of self-righteous indignation and irritation about things, which really I should just let go. I think that’s sort of dishonest.”

BBC Films, the U.K. public broadcaster’s standalone film-making unit, has optioned the rights to ‘That Part Was True’. 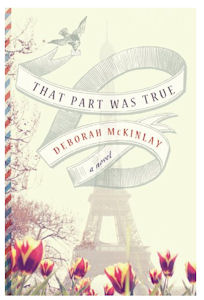 Deborah’s new book ‘That Part Was True’ is featured in here:

An interview with Tyne Swedish Unplugged

Where are you from?

I was born in New Zealand, but have lived in many countries. I am fairly settled now, I think, in England.

What is your favorite quality about yourself?

Well, the most helpful quality, from a writing point of view, is that I am quite self-motivated. I enjoy to work alone.

What is your least favorite quality about yourself?

I am impatient. This is not a good thing in the publishing world, and no use at all if you’re dealing with small children.

What is your favorite quote, by whom, and why?

I like different things at different times, but a friend’s father said to me (years ago), ‘You’ve got to keep putting one foot in front of the other.’. And I have reminded myself of that often.

What are you most proud of accomplishing so far in your life?

I’ve kept putting one foot in front of the other

What’s your favorite place in the entire world?

I like a lot of places. I love the great cities like New York, London, Paris and Barcelona, but I am happiest when I can hear the ocean.

Do you recall how your interest in writing originated?

Like most writers I read a lot as a child. The curiosity about stringing words together probably came from there.

When and why did you begin writing?

I began submitting articles to magazines as a way of supplementing my income in my twenties.

How long have you been writing?

My first book was published in 1994

When did you first know you could be a writer?

I decided to try to work at it full-time when I won a couple of writing competitions. That gave my confidence an enormous boost.

What inspires you to write and why?

When I am not writing I feel as though something is missing.

What genre are you most comfortable writing?

What inspired you to write your first book?

I showed an idea to an agent who encouraged me to pursue it.

Who or what influenced your writing once you began?

My own desire to get better is the greatest influence on my work.

Have you ever had writer’s block? If so, what do you do about it?

I used to struggle with over-analysis of my work (which is what I think writer’s block is) when I had more time to do it. Nowadays I just get on with it whenever I get the chance.

Can you share a little of your current work with us?

The View From Here tells the story of a dying woman’s reflection on her own past and the way that events from her youth have impacted on her life.

How did you come up with the title?

The publisher (Soho Press) came up with the title.

Can you tell us about your main character?

Frances is a apparently a mature, contented woman, living a responsible life. In her youth, however, she was much more aimless, reckless even. In telling her story she examines the way these two personas overlap.

How did you develop your plot and characters?

The story takes place in two settings (England in the 1990s and Mexico in the 1970s) I wrote each section separately.

Who designed the cover?

Who is your publisher?

Why did you choose to write this particular book?

It grew from the seed of a small incident in my own life. I met some people in a restaurant years ago who invited me to stay with them. I did not go, but asked myself later – What if? I think that question is the beginning to any story.

How do you promote this book?

How can we purchase your book?

At any US bookstore or online from any book retailer.

Is there a message in your novel that you want readers to grasp?

Perhaps that everything is relative.

What are your goals as a writer?

To keep doing it.

Who is your favorite author and why?

I particularly like modern American writers, including Hemingway, Carson McCullers, Updike and Roth.

Can we expect any more books from you in the future?

I hope so Have you started another book yet? Yes, I am working on a comedy.

Are you reading any interesting books at the moment?

I just finished Bill Bryson‘s ‘A Walk in The Woods‘ I loved it.

How do you deal with rejection letters?

Stomp about for a bit, indulge in some self-pity, shrug it off and start over.

Are there any new authors that have sparked your interest and why?

I am very interested in the way some new writers are by-passing traditional publishing using e-books.

What are some of the best tools available today for writers, especially those just starting out?

A pen and paper

What contributes to making a writer successful?

Do you have any advice for writers?

No, but in ‘Writing Down the Bones‘ Nathalie Goldberg asks the question: “If I weren’t writing what else would I be doing” (paraphrased). I think the way you answer that question will tell you whether you ought to keep at it.

Do you have any specific last thoughts that you want to say to your readers?

All the best, Deborah

An interview with Middle Aged Diva 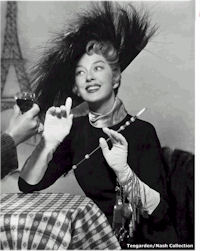 Go for excellence, sweetie. It’s not a crowded field.

If it can’t apologize or heat beans, don’t marry it.

Sweetie, don’t pick out lovers or lipsticks in a dim light.

If you recognize these bon mots, chances are you follow Your Aunt Lola on Twitter or Facebook. Her piercing witticisms offer the kind of pointed advice you’d like to get from an experienced, much older aunt.

But alas, Aunt Lola isn’t really your aunt; she is a fictional character created especially for social media by British writer Deborah McKinlay. McKinlay’s new novel, The View from Here, comes out tomorrow (but can be ordered today).

Although her novel isn’t comic, McKinlay has a deft hand with the clever barb.

“I love those old movie broads like Auntie Mame,” she says. “I didn’t have any particular project in mind for Aunt Lola when I started but I was keen to understand Social Media and she was a good vehicle.”

“Social media give us the most fantastic opportunity to introduce ourselves to each other,” she says, and she’s right. It’s how she and I “met.”

Twitter suits her best, she says, because she loves jokes and one-liners and Twitter encourages that kind of rapid-fire communication.
.
The world of publishing is changing, McKinlay says, and she believes that social media are an important tool for today’s authors.

“It’s important to be prepared to give some of your work away so that readers have the chance to get to know you before they invest time and money in you,” she says.

McKinlay says Aunt Lola’s lines are all original but some are heavily influenced by old films and writers such as Anita Loose and Garrison Keillor.

“There is a lot of me in Lola, as much as she says things that I wish someone had told me when I was about 27,” she said. “I’m very touched by the messages I’ve received from women of all ages, who say that one of the tweets has helped them or made them laugh.”

The View from Here is her first novel, and she says that it reflects her belief that ideas about life change with age:

“As Aunt Lola says, ‘One day you’ll have been and done most of the things that bug you now, sweetie. Start lightening up and destroying evidence.'”

The story line pivots around a woman whose life is unraveling, which triggers an examination of a period in her past when she was briefly the mistress of a married man while staying with him, his wife and their rich and glamorous friends in a mansion in Mexico.

While it is not a comedy, McKinlay says some of the characters are witty and reflect some of Aunt Lola’s sharpness.

McKinlay tweets and writes from her home in the English countryside. Almost 50, she has a young son, and her life there keeps her busy.

“When I am not writing I’m washing, cooking spaghetti or pulling small plastic objects from the back of the sofa,” she says. “I like painting and gardening, but time for these things is a great luxury.”

Any advice for mid-life women?

“I wouldn’t say that I am just hitting my stride, but I do think that age can be terribly liberating. I am much more self-confident, while at the same time less brash, than I was at 30. I went back to Cambridge to study Psychology and had a child in my forties, and I think I am only just beginning to grasp the notion that life is a work in constant progress. Follow Aunt Lola on Twitter, friend her on Facebook and while you’re at it, pick up the new novel , The View From Here, on Amazon or at your local bookstore. I can’t wait to read it.